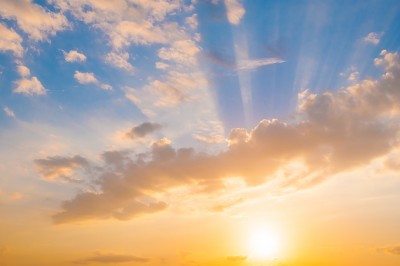 “There are voices in our world, and perhaps even sometimes within our own frightened hearts, which will tell us that our Easter rejoicing is foolishness; that life really is meaningless; that celebrating the passion and resurrection of Jesus Christ is folly; that the fellowship and strength received by those who claim a place in the Body of the Risen Christ is nothing but a crutch and an illusion. …Don’t believe it.”

Congressman John Lewis, the noted civil rights leader from Georgia, has written of playing with his fourteen cousins in his Aunt Sevena’s dirt yard when suddenly the sky turned dark.  Lightning flashed.  The wind blew in.  John and his cousins were terrified as his aunt shepherded them into the house.  Lewis recounts in his autobiography:

The wind was howling now, and the house started to shake.  …  The wood plank flooring beneath us began to bend.  And then, a corner of the room started lifting up. … The storm was actually pulling the house toward the sky.  With us inside it.  That was when Aunt Sevena told us to clasp hands.  ‘Line up and hold hands,’ she said, and we did as we were told.  Then she had us walk as a group toward the corner of the room that was rising.  From the kitchen to the front of the house we walked, the wind screaming outside, sheets of rain beating on the tin roof.  Then we walked back in the other direction, as another end of the house began to lift.  And so it went, back and forth, fifteen children walking with the wind, holding that trembling house down with the weight of our small bodies.  [John Lewis and Michael D’Orso, Walking with the Wind: A Memoir of the Movement, Simon & Schuster, 1998]

We remain ever with God, and by God’s grace, with one another.  Sometimes it is that, and only that, which enables us to face the storms of life.  “The wind blows where it chooses,” said Jesus. (John 3:8)  And so it does.  Sometimes, seemingly, for better; sometimes, seemingly, for worse.  So we walk into the wind, hanging on tight to one another and, by God’s grace, holding that trembling house down.

Another house is described by another man named Lewis.  Near the end of C. S. Lewis’s book The Last Battle, the final story in his Chronicles of Narnia, a group of surly dwarves is huddled together in a tight circle.  The dwarves have been thrown by their enemies through a door into what they believe is a dark, smelly stable.  In truth, the doorway has led to a lush countryside where the grass is greener than green, the sky bluer than blue – just the sort of place that New Englanders have been fantasizing about for the past month!

Nearby, the golden lion Aslan stands with other dwarves and children who bury their faces in Aslan’s mane and receive his gentle nuzzling.  But the little group of ill-tempered dwarves sits apart, willfully oblivious to the beauty around them.

They had a very odd look. They weren’t strolling about or enjoying themselves (although the cords with which they had been tied seemed to have vanished) nor were they lying down and having a rest. They were sitting very close together in a little circle facing one another … . “Look out!” said one of them in a surly voice. “Mind where you’re going … in this pitch-black, poky, smelly little hole of a stable.” … “But it isn’t dark, you poor stupid Dwarfs,” said Lucy. “Can’t you see? Look up! Look round! Can’t you see the sky and the trees and the flowers? Can’t you see me?” “How in the name of all Humbug can I see what ain’t there?  And how can I see you any more than you can see me in this pitch darkness?”

“You see,” says Aslan, “they will not let us help them.  They have chosen cunning instead of belief.  Their prison is only in their own minds, yet they are in that prison; and so afraid of being taken in that they cannot be taken out.”  [C. S. Lewis, The Last Battle, Chapter 13: “How the Dwarves Refused to be Taken In”]

The darkness around us is real, no question.  The division, bitterness, fear, hostility and violence – all of these are real.  But real also are the forces pushing back against such division and hostility.  Real is the determination to remain our best selves, individually and nationally. Real is the hope that comes in unexpected and unanticipated places.  The darkness is real, but may it not blind us to the great, wondrous news of our salvation in the resurrection of Jesus Christ, his victory over death and sin, and manifestations of that resurrection.

There are voices in our world, and perhaps even sometimes within our own frightened hearts, which will tell us that our Easter rejoicing is foolishness; that life really is meaningless; that celebrating the passion and resurrection of Jesus Christ is folly; that the fellowship and strength received by those who claim a place in the Body of the Risen Christ is nothing but a crutch and an illusion.  “You can’t really see what you see,” said the dwarves.  “You aren’t really tasting what you taste,” said the dwarves. “You can claim it’s light if you want to, but we won’t be taken in!” said the dwarves.

Don’t believe it.  Don’t let the blindness of fear, or the blindness of fatigue, or the blindness of the unexpected, keep you from seeing and hoping and rejoicing.  Look up, my friends. Look around.  Look beyond the very real but in the end not victorious signs of brokenness and cruelty in our midst.  Look for manifestations of grace and beauty.  Look for healing and compassion.  See where they shine through in unexpected places.  Pray for light and vision and courage.  Look for resurrection.  And dare to believe!

Then, with the hope of a risen Easter people, walk back into the wind.  With God’s help and the companionship and love of one another, walk into the wind to be with the discouraged and despairing – in our homes, our neighborhoods, our city, our nation, our world. Together, by God’s grace and the strength of our Risen Lord, may we hold that trembling house down.

Easter blessings to you!