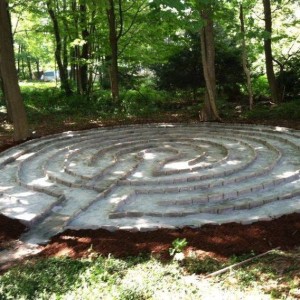 A labyrinth is a path which leads, via a circuitous route, to the center of an intricate design and back out again. A labyrinth’s route is unicursal; that is, it has only a single path. Unlike a maze, a labyrinth is designed for ease of navigation, and it is impossible to get lost within one.

Labyrinths have been used by a wide variety of cultures for at least 3,500 years. Evidence of ancient labyrinths exists in Crete, Egypt, Italy, Scandinavia, and North America. Ancient labyrinths had what is usually called the “classical” design of seven rings, or circuits.

In the Middle Ages, the Catholic Church adapted the labyrinth for its own purposes within its cathedrals. The classical form gave way to a more intricate design of 11 circuits in 4 quadrants, usually called the “medieval” design. Within Catholicism, the labyrinth could symbolize several things: the hard and winding road to God, a mystical ascension to salvation and enlightenment, or even a pilgrimage to Jerusalem for those who could not make the actual journey.

The meditative labyrinth behind St. Paul’s parish hall was built by Ray Gorzela of Andover’s  Boy Scout Troop 77 for his Eagle Project, in the summer of 2013. It is open to the community for meditation, prayer and reflection.

The labyrinth is a seven-circuit design which is 32 feet in diameter, and is constructed using edgers, stone dust  and sand.

Ray led and coordinated the work of all aspects of the project: investigating labyrinths, electing an appropriate site, clearing and preparing an unused area of the parish property, design and construction, and preparing access. Some interesting facts: