Our Church thrives because of the energy and style of the people who make up our leadership.
Here are a few of the people that make our church community special: 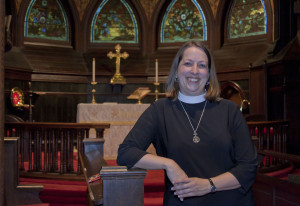 The Rev. Sarah D. Máto is the rector of St. Paul’s and was called to serve at St. Paul’s in the fall of 2014, after serving for 2 years as the Assistant Rector of the Church of the Holy Spirit in Orleans, MA.  Sarah was ordained to the deaconate and to the priesthood in the Episcopal Diocese of Massachusetts by the Rt. Rev. M. Thomas Shaw, SSJE.  She is also an associate of the Society of St. Margaret.  Sarah received a Master of Divinity, a Certificate in Spirituality, an advanced Masters in Sacred Theology, and is currently working on a Doctor of Ministry Degree from Sewanee School of Theology in Tennessee.  She completed her advanced master’s thesis on theological aesthetics in Western and Eastern spirituality, which is entitled: Divine Beauty:  Experiencing God Through Sight and Sound.

Prior to seminary, she received a Bachelor of Arts in Education from Capital University in Columbus, Ohio and taught in the public school system for several years.  A trained soprano, Sarah studied voice at the Capital University Conservatory of Music.  She has sung with the Capital University Chapel Choir and Choral Union, the Chatham Chorale, was soloist with the Sewanee Chorale, and The Masterworks Chorale in the greater Boston area.  Sarah loves being a mom to her two young children, Aidan & Anna and sharing cuddles with her Labradoodle, Luna and her Shepadoodle, Sophie. 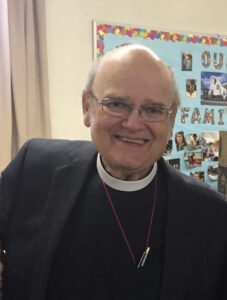 “Fr Paul” is a native of Somerville, MA and spent the early years of his life there. When the family moved to Toronto, Ontario he continued his education at Glendon College, York University and in 1967, earned a BA with a major in Psychology and a minor in Sociology. In 1972 Fr Paul received his MDiv from the then Episcopal Theological School and majored in Biblical Studies. Later that year he was ordained to the Diaconate and the Priesthood by The Rt. Rev. John Melville Burgess. Since that time he has served congregations in the Diocese of Massachusetts, Ohio, South Carolina, and West Virginia. In retirement Fr Paul has continued to serve the church as Interim and Bridge priest in a number of congregations in the Diocese of Massachusetts and Bethlehem in Pennsylvania, including right here at St. Paul’s. During the pandemic Fr Paul has developed an online ministry on Sundays at 4pm which he calls “Godspell” and a midweek Celtic Bible Study. Fr Paul considers it a special honor to serve St Paul’s Church with The Rev. Sarah Mato as Associate Priest.  frpaul.com 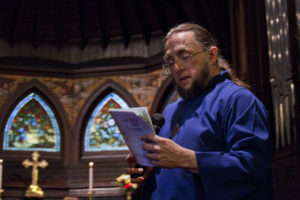 Ed studied music at Yale while earning a B.S. in computer science.

In addition studying and performing organ music, Ed has always been fascinated by the inner workings of the King of Instruments. As a teenager he immersed himself in the literature of organ building; in the 1980’s he bought and rebuilt a small pipe organ in his basement. In the early days of the World Wide Web, Ed began compiling a website that listed names of organ stops. This work soon grew into the Encyclopedia of Organ Stops, which is now accepted as the most comprehensive work of its kind.

Ed took a regular position as Minister of Music for St. Stephen’s Episcopal Church in Middlebury VT. It was there that he started coming into his own as a composer and arranger of sacred music. During that time he created ChristmasCarolMusic.org, the first website to offer free sheet music for dozens of traditional Christmas carols. A few years later Ed reluctantly left Vermont to return to high-tech opportunities in greater Boston. Settling once again in Nashua, in 2008 he answered the call for a new music director here at St. Paul’s. Ed continues to compose and arrange sacred music, and his works are frequently heard in services at St. Paul’s.